If you've never had air fryer cinnamon rolls, you've got to taste what all the fuss is about immediately! They are so soft and light in the center, and are done in a fraction of the cooking time.

There's a time and place for that easy, pop-able tube of store bought cinnamon rolls, and the air fryer is the perfect place to make them!

Not only is there no pre-heating involved, but using an air fryer cuts cooking time in half.

The air fryer method makes for the perfect texture for these easy-bake cinnamon rolls. They come out extremely soft, incredibly light and fluffy on the inside, with perfect centers.

As if it couldn't get easier, by dropping a piece of parchment paper in the air fryer basket before the cinnamon rolls, you can eliminate all cleanup.

Virtually any size air fryer with an inner basket over 7 inches in diameter will accommodate a standard tube of store bought cinnamon rolls. For miniature air fryers, cook half of the rolls in one batch.

All you need are the following items:

-Store bought easy-bake cinnamon rolls in the tube (like Pillsbury)

-An air fryer of any size

Parchment paper helps soften the cinnamon rolls, while making for the easiest cleanup, as in none whatsoever.

If you don't have parchment paper, you can opt to spray the inner basket with a light oil, or wipe it if desired.

Pull out the basket of the air fryer and throw down a sheet of parchment paper. (Or spray with oil.)

No need to preheat!

Pop the tube of cinnamon rolls and arrange them neatly in the basket, evenly spaced apart.

Close the basket and drawer and turn on the air fryer.

Cook the cinnamon rolls for 7 minutes.

At 7 minutes, pull them out and check one of the centers by inserting a toothpick. If the toothpick pulls back out without any wet dough, they're done!

Pull out the basket and drizzle the icing provided over each of the cinnamon rolls.

Note that a little gooey-ness is okay when you first pull out the cinnamon rolls as long as the entire tops are fully cooked and the edges are toasted.

This means that when you poke the very center it doesn't depress, but it can move slightly as long as it springs back.

The cinnamon rolls will continue to set in the pan as they cool, and the residual carry-over heat will cook them the rest of the way through, which is why it's important to also drizzle the icing on them while still in the pan.

How long does it take to cook canned cinnamon rolls in an air fryer?

It takes half the time to make store-bought, canned cinnamon rolls in an air fryer as it does in an oven.

How much space should there be between cinnamon rolls before cooking?

To maintain shape, cinnamon rolls should be placed 2 inches apart, but they can be as close as ½ inch for pull-apart style cinnamon rolls which will also lengthen cooking time.

Check out these related recipes below, or keep scrolling past to get to the recipe card.

Did you try these air fryer cinnamon rolls?

Leave a rating in the recipe card below! 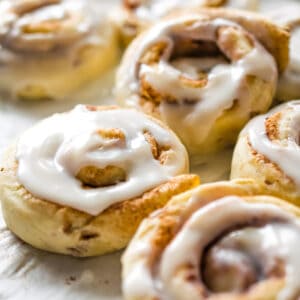 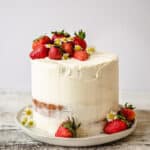 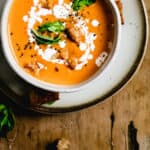 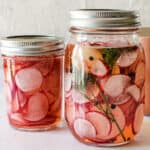 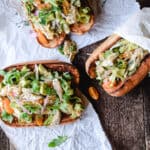