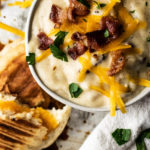 Beer cheese potato soup with crispy bacon is an under 1 hour dinner recipe that combines the M.V.P's of favorite foods: Beer. Cheese. And Bacon. (It can also be made in the slow cooker.)

This recipe can be made:

Start by frying the bacon pieces in the bottom of a large stock pot until extremely crispy, but not burnt.

Otherwise, a semi-crisp bacon would end up being sort of ham-textured once it was allowed to simmer in the soup.

Do this first step of frying the bacon with nothing else in the pan to crowd the bacon; this also helps create super crispy bacon.

Crowding the bacon with other ingredients would end up having a steaming effect, resulting in soggy bacon.

Once the bacon is completely crispy, remove it from the pan to a paper towel lined plate to drain.

Give the pieces some room and scatter them, rather than just dumping them in one heap on the plate so that they can cool off without getting soggy.

Drain all but a couple of tablespoons worth of excess oil from the pan and remove the pan from the heat so that the grease doesn't smoke. You'll use this bacon grease instead of oil or butter for the next step of frying the potatoes.

Fry the potatoes in the pan that the bacon was fried in, with the reserved bacon grease.

The bacon grease adds flavor, but frying them par-cooks the potatoes so that they don't have to cook as long in the soup.

Starting with the potatoes, peel and rinse them and dice them into ½ inch cubes. (To make uniform cubes, start by slicing the peeled potatoes into half inch thick ovals, then slice those ovals into ½ wide sticks, then slice the sticks long ways into the cubes.)

Add the potatoes to the bacon grease, and sauté on medium high heat. Stir them around so they don't burn. This gives the potato cooking process a jump start in softening, helping speed up cooking time.

While the potatoes are frying in the pan, peel and mince one small to medium sized onion and add that to the potatoes.

When the onions are translucent, add the peeled, minced garlic cloves. Sauté for another minute or two, just until the garlic becomes fragrant.

This next step is one of my favorite things to do in cooking, and it's called deglazing. Deglaze is just a term that describes adding liquid to a hot pan and the cooked pieces in it, loosening up everything that is stuck to the bottom of the pan.

Pour the beer into the pot, and let simmer for a few minutes to evaporate alcohol.

Then add the chicken stock and seasonings. Stir, and reduce heat to medium.

Let it simmer there for 20 minutes. During this time, the potatoes will cook through and liquids will reduce and flavors combine.

After 20 minutes, check that the potatoes are fork tender by piercing them with a fork. (If they need a bit longer, let them go until they are finished cooking.)

Remove the pot from the heat. Whisk the cornstarch together with a few tablespoons of water. Whisk until no lumps remain.

Add the cornstarch slurry to the pot, followed by the cream, shredded cheddar cheese, and crispy bacon pieces.

Stir those ingredients into the soup, and return the pot to the heat, and lower to a low simmer for 5 more minutes until thickened.

Remove from heat and serve with a crusty bread, grilled cheese or salad.

The best beer to use for this beer cheese type soup, is a medium bodied beer, like an amber ale, although light lagers can be used too.

The more full bodied beer like an amber is going to give a richer taste, and you'll taste the beer itself more.

The type of beer that works for this soup is definitely subject to personal preference, however do stay away from an extremely hoppy beer like an IPA. They will be too bitter. 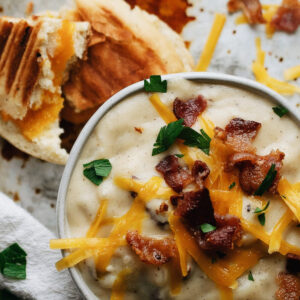 2. To make this recipe in your Instant pot or pressure cooker: Choose a light lager or mild ale. Nothing to hoppy or stout. 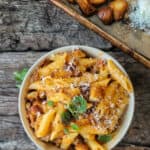