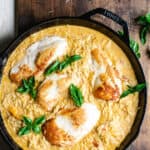 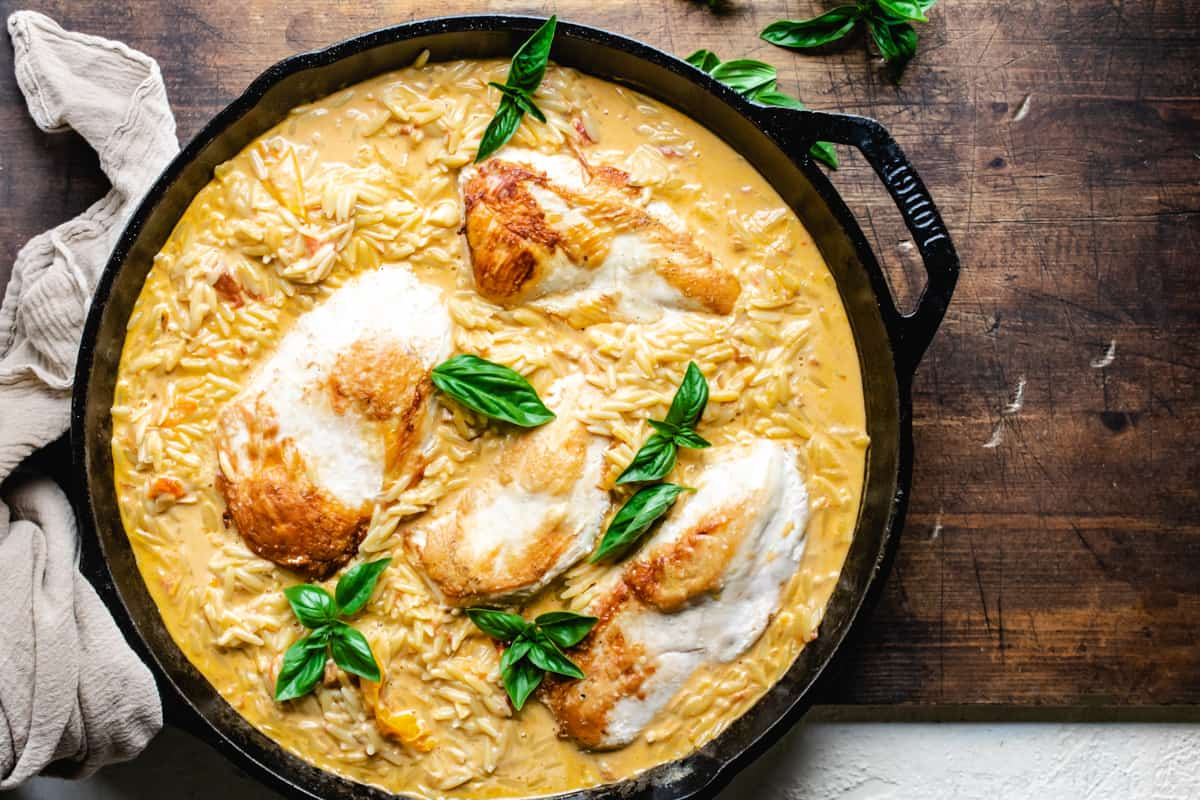 This is one of my favorite dinners to make. Not only is it a full, one skillet family meal that's done in about 40 minutes, but it's insanely delicious.

The recipe only calls for a few ingredients, and nothing fussy. All you need is:

I included a link on orzo above, in case you aren't familiar with what orzo actually is. It's just a rice shaped pasta, it's not actually rice though. You can buy it at the store, or make it homemade. Here's a super easy tutorial on how to make your own using just a pair of scissors!

Feel free to use Kristen's pasta recipe that she includes, or my recipe for easy, Homemade Pasta Dough.

Yellow and orange tomatoes are often heirloom variety, and they have a mild and sweeter flavor. You can use a combination of any heirloom tomatoes you like, or small or large sized tomatoes. In this pan, I chose the following combination:

How to make it

**Note: It is said (and often debated) that you shouldn't cook acidic foods like tomatoes or wine on cast iron, because it can cause a metallic taste. Some people will argue that while you shouldn't for long periods of time, that it's fine for short periods of time, and especially if you have a good seasoning built up. Click here for more information on cast iron cooking.

You just can't get a sear like that on a regular pan, and because the chicken is finished in the sauce, it's great to have that crispy browning already on the chicken.

Sear the chicken on both sides, salted and peppered, in a bit of olive oil or butter (I prefer butter here). Don't move the chicken while it's browning, because that can affect the crust, just let it sit and don't disturb it until it's time to flip them all over.

Once you've acquired a nice sear on both sides, remove the chicken from the pan and set aside on a plate. They'll go back in to finish cooking later.

In the same pan, still hot, add the tomatoes, shallot, and garlic and sauté.

Then, add the stock, orzo and cream, nestle the chicken breasts in to finish cooking through, and simmer until the orzo is tender. For a pretty touch, you can garnish with fresh basil. 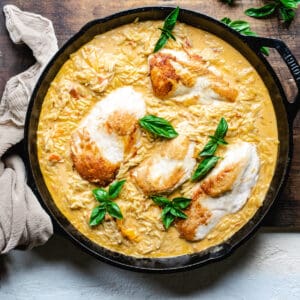 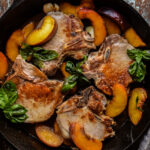 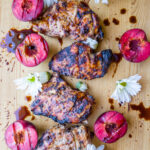