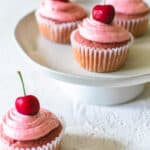 Moist and fruity real cherry cupcakes, with cherry frosting and a cherry on top!

The best thing about these cupcakes, is that the cherries flavoring is real. You can use very fresh cherries, or frozen cherries. Overly ripe (not rotten) cherries are actually even better, because they are sweeter and juicier.

how to make cherry flavoring

Start by measuring out 4 cups of cherries (fresh or frozen). Add them to a pan, along with a couple tablespoons of sugar and a cup of water.

Cook the cherries on a low boil until the contents of the pan is reduced by three fourths (until 25% remains). Puree or blend what's left in the pan to create a cherry "concentrate". If you prefer some pieces of cherry, then just slightly blend them up, without making the cherries smooth.

Put the cherry mixture in the fridge to help cool it down quicker.

Don't attempt the cupcake batter until the cherry mixture has finished reducing, and is at least starting to cool down. (It doesn't need to be cold, just close to room temperature.)

Then fold in the cherry sauce until it's evenly blended.

Fill lined cupcake tins two thirds of the way full. Bake until tops are springy, or toothpick inserted in center comes out clean.

This is a no-fuss cherry frosting. Whisk all frosting ingredients (butter, vanilla, powdered sugar, heavy cream and ⅕th of the cherry reduction puree) until blended and fluffy. Don't overdo the mixing. Once it starts to look fluffy, stop. If you use a hand held whisk and bowl, it's easier to not over beat it.

Frost cooled cupcakes with a knife or spatula. One cool trick is to fill a zipper bag with the frosting, and cut the tip off to pipe it in a round shape onto the cupcakes.

If you have fancy piping tips and bags, feel free to use them, as these cupcakes are so pretty and the frosting is so pink and nice when piped onto the cupcake tops.

Don't attempt to frost warm cupcakes, or the frosting will slide right off.

Store un-frosted cupcakes at room temperature for up to three days.

Store prepared frosting in the fridge for up to 5 days.

Frosted cupcakes can be left on the counter for several hours but stored in the refrigerator overnight.

Cupcakes can be frosted and stored in the freezer for several weeks, and thawed on the counter top at room temperature.

If you enjoy a fruity cupcake, try these Strawberry cupcakes too! 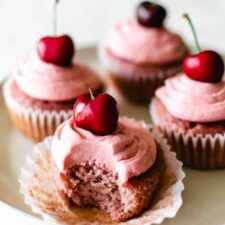 For the cupcake batter

For the cherry frosting

For the Cherry Flavoring (Sauce)

For the Cupcake Batter

I'm Erin, I enjoy creating rustic, from-scratch recipes that are tasty, comforting, and use basic pantry staples. More about 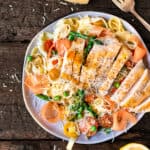 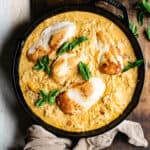 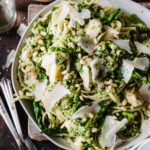 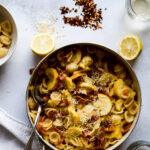